Our refrigerator has been rather noisy for a while. One would think that a new appliance wouldn't make so much noise. Then it started freezing the produce, in the bin and on the shelf above. With the price of produce, I hated having it get spoiled and have to toss it out. Jay got on the good ol' innernet and did some studying and the first thing it said to do is to clean any dust off of the fan and condenser. Well, there also happened to be a boat load of cat hair with all of that dust. A little vacuuming, a little degreasing with some vinegar water, and voila! She runs like a champ, never been so quiet. We love it when it's an easy fix.

And now for some nature photos, our resident banded gecko: 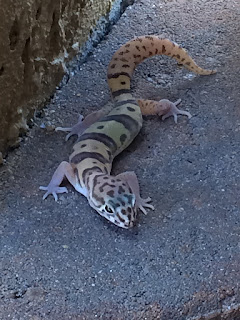 I sat down to try to write this yesterday, but was not feeling up to the task at all. I had some kind of stomach/intestinal bug the day before and it really took the wind out of my sails besides taking a lot out of my body. ‘Nuff said. 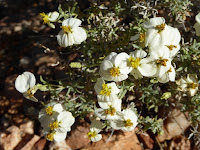 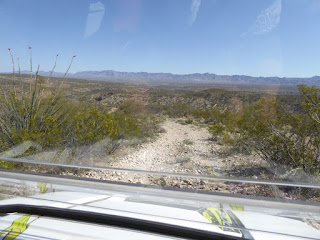 So today, while Jay is out on the dusty trail to Patagonia I am at home to share some pictures of last week’s adventure. This time we parked on the Tucson side of Redington Pass road. A beautiful view of Tucson from here and there are many trailheads for hiking along the way. I was torn, go ride and see beautiful scenery, or go hike and see beautiful scenery. I opted to ride and I’m glad I did. I had told Jay before we left that I would like to drive some which means a few minutes to adjust the seats, and our fearless leader was eager to get started so we waited. After about 45 minutes of riding, we stopped for a little break, also the road sort of ended so we needed to figure out which way to go. This gave Jay the few extra minutes needed to change out the seats. And away we go!

We drove out across the desert on the north side of Mt. Lemmon, down in to the San Pedro river valley, along a pipeline right of way which was like a roller coaster ride. You know when you go up the hill and you can’t see which way the thing is going to go. Maybe it goes to the left, maybe it’s a drop off, or maybe it’s flat for a bit. Well, I figured the RZR has pretty good brakes and I have pretty good reflexes and everyone else is going fast so I might as well go for it. It was so much fun, but Jay was pretty white knuckled holding on to the o-sh** bar on some of the hills. He is not a fan of roller coasters and he’s not used to not being the driver. Because I was driving I didn't get any pictures of that and Jay was too busy holding on. 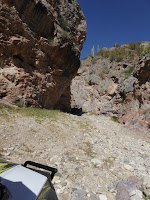 We took a left turn to head into a wash to see how far we could go up the canyon. It’s really pretty, you can see a lot of the layers of rock, pink and yellow. But the sand is soft. Super soft. Fearless leader and Ron were ahead, then Don, and us with Bob bringing up the rear. Things were going along pretty well, then Jay says, whoa! Don is not going forward. He is up to the axles in sand. 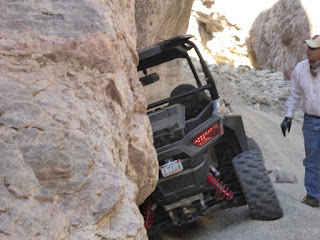 As he tried to get out of it, he managed to sink deeper in the sand and got wedged up against the rock wall. Who’s got a winch? Mike says, I left mine at home and laughs(get it, wench/winch, wink wink?) Everyone’s a comedian. Jay hooks on to the back first and tries to pull him back. That doesn’t work too well, so Ron and Mike who are in front of Don, hook on and manage to pull him forward. Don is pressing against the wall so the whole side of the rig doesn’t get scraped up and he comes away with just a few minor scrapes. I tell him it’s okay, chicks dig scars. Apparently, there wasn’t any further to go up the canyon, so we all turn around, I did not have to drive through that narrow passage and I thanked Don for that! 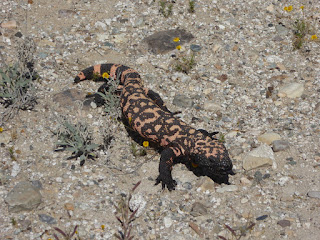 Back on the roller coaster road before heading up the side of the mountain, fearless leader spotted a Gila Monster crossing the road. Not sure how he sees stuff like that especially going 30 mph or more on a dirt road, but he stopped and kept an eye on the thing so we could get some pictures of it. Pretty cool to see one in the wild. I do not want to see one in my back yard. 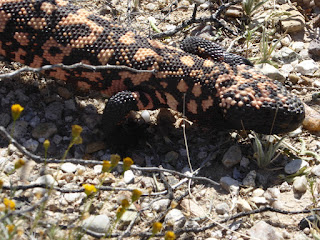 After that, we keep going, heading up a narrow, winding dirt road to Mt. Lemmon. We had our lunch break along the road, better views from there than at the top and the wind wasn’t blowing there. Once we got to the top, we turned around and went back down!


I thought Jay would take over the driving, but he said no, just keep going. So all the way down, then around and over some mesas. 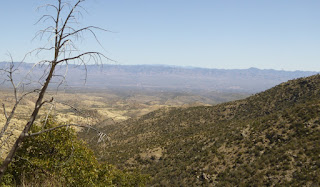 Fearless leader stopped for a break and gave us the caution that the next section is ‘kinda’ steep. Okay, what does that mean? Well, we went to find out what that means and it’s really freakin’ steep and long a looks more like a cow path. Actually worse than a cow path because there are no big marbley type rocks on a cow path.


No time to be scared about going up, remember what Jay says, don’t stop in the middle, just keep going. I didn’t even give him time to get out his phone for pictures, not that he could have taken any it was so bumpy. I couldn’t have stopped anyway, Bob was right behind us and that would have been disastrous. I was surprised at how long it was, not just how steep. We made it to the top and the guys were impressed with my driving. 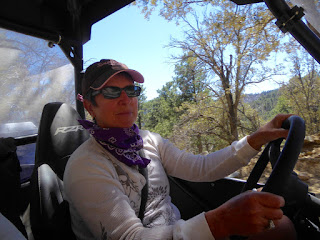 Next, we drove along the top of the mesa, eventually making our way back down to a valley, about an hour away from where we left the trucks. I have been driving now for about 5 hours, running on adrenaline I think and starting to get tired. The group decides to do a little more exploring to try to find another road back to Redington Pass. It is a really crappy road, rough ride, worse than the gravel roads. But we had no luck. At that point I realized I was really tired and told Jay he needed to take over. I am learning what my limits are in the buggy, both as a rider and a driver. It was a fun day and as I said in the beginning, I’m glad I went. And sorry I am missing today’s ride, but there will be more.
at April 01, 2016 No comments: 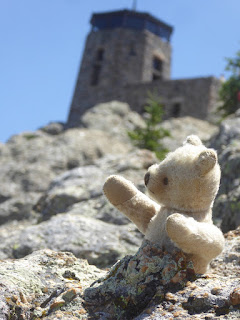